Detective Clarence Daly (1885-1926) is part of a collateral line but researching him was fun. A family story said there was a "Clarence Daly" who became a New York City policeman and died on the job. Oddly enough, that family story is true. 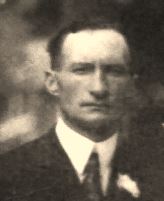 Most family stories may contain a hint of the true story or are just wishful thinking but this one turns out to be true. For years I couldn't find a Clarence Daly so I wasn't really looking for him. Then one day I decided to look at my great-grandfather's brother and his family. I realized John Robert Daly (1848-1915) lived across town from my great-grandfather, James Martin Daly (1850-1927). James was in Sayre (PA) and John was in South Waverly (PA) or Waverly village (NY). Digging into John's family I came across Clarence and decided to spend some time looking at him.

That "some time" turned into several months and lots of records because Clarence was in the newspapers a lot once he became an NYPD detective. I've been tinkering with the idea of writing short stories about specific ancestors so I chose Detective Clarence Daly as my first subject. The photo at right shows Clarence in 1916 as a member of his sister Mary's wedding to George Sutton.