Family historians should always look for vital records to identify 3 key moments in an ancestors life. These “vital records” identify and prove a person’s birth, marriage, and death.

The records are called “vital” because they are records of life events kept under some government authority. The events, however, might not have been recorded or have been lost in the meantime so you might need to look for alternate records beyond what a government collected.

One of the limits to these records was the cost of writing materials including ‘paper’, pens, and ink. Before the invention of cheap wood pulp based paper, the writing surface was often made of expensive materials such as an animal skin. Sheep, calf, and other skins were scraped and prepared to be used for writing things down. It was called parchment or vellum. Once the cost of writing materials came down, recording life events – especially the life events of common people – became possible. My point is that, at some point, the records I’m going to list below will become too expensive so there will be no records to find.

Vital records that identify the actual birth event are a recent phenomenon as noted above due to the cost of writing materials. These vital records generally identify any combination of the following:

Birth records might include other information also, such as the attending physician.

A Birth Certificate is an official record of a person’s actual, physical birth. Different countries and sub-divisions of countries (i.e., states, provinces, counties, etc) began collecting and recording birth registration information at different times. In the United States, the Department of Health is usually responsible for these vital records.

(It’s usually illegal to photocopy a birth certificate so I’m not going to publish any here. Sorry.)

The birth certificate itself is just a printed version of the birth registration info so if you lose a copy, you can request another one from the Department of Health or whatever department handles these vital records.

One alternative to the birth vital records is a religious record initiating that person’s entry into the religious community. Christians, for example, often have a ceremony called baptism or christening. 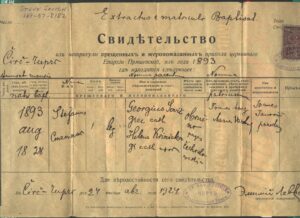 Marriage and divorce are not guaranteed vital records. I mean, not everyone got married and not everyone who got married, got divorced. So, you might or might not find these life events. 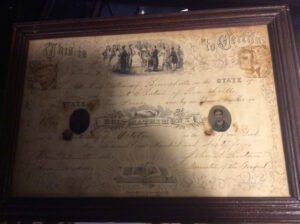 The marriage certificate is a civil (i.e., not religious) record of a marriage. It is considered a primary source of evidence for the event. 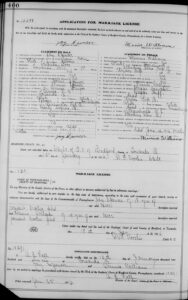 There’s usually a ‘return’ portion of the application filled out by the officiant – the person who was licensed to conduct a marriage – and returned to the government.

The marriage application is a civil (i.e., not religious) record of a marriage. It is considered a primary source of evidence for the event.

Christian churches, Jewish synagogues, and other religious organizations often record the marriage within their records to prove the two people are a couple within the religious community. This is not an official record but it can still be considered a primary source. Many of these records are not available online so you need to write to the organization to request a copy or even just a transcription of the information.

It’s a fact that not all marriages last until “death do us part”. So, governments often record this life event. Divorces are a legal break of the marriage contract so they are usually found in court records. What a court records – the level of detail – and what the court will provide access to can vary greatly by jurisdiction. Divorce records are primary source records but they are rarely online.

Vital records that identify the actual death event are a relatively recent thing. In the US, many states required county clerks to register births and deaths until the early 20th century. Compliance with the law was spotty at best and, in some counties, almost non-existent. So, the state Departments of Health took over.

The information collected on death certificates varies by jurisdiction but generally  includes:

Other information may also be included such as the actual International Classification of Diseases (ICD) code or number. The ICD code can change over time so you need to match the number with the correct year. If the diagnosis doesn’t make sense, the doctor could be using an older or newer code. 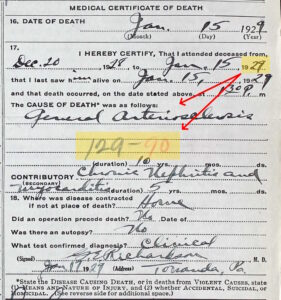 A Death Certificate is an official record  of a person’s actual, physical death. Different countries and sub-divisions of countries (i.e., states, provinces, counties, etc) began collecting and recording death information at different times. In the Unite States, the Department of Health within a state is usually responsible for these vital records. The federal government usually does not have these records. 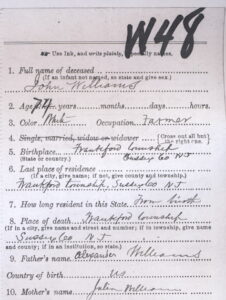 The death certificate itself is just a printed version of the death registration info so if you need a copy, you can request another one from the Department of Health or whatever department handles these vital records.

The death certificate is also usually filled out by several people including the attending physician or a nurse or clerk recording the information provided by the doctor, the undertaker / funeral director, and the government clerk responsible for registering the death. The informant is usually the person who provided the information about birth, parents, etc.

The obituary is a newspaper article providing a summary of a deceased person’s life. The article can be long or short and can contain facts, stories, and even lies. The descendant’s family, an undertaker, a newspaper reporter or anyone else can write the obituary so you don’t know the source for this information. So, take an obituary with a grain of salt.

Since obituaries often cost the family to publish, sometimes you can only find the funeral announcement in the newspaper. 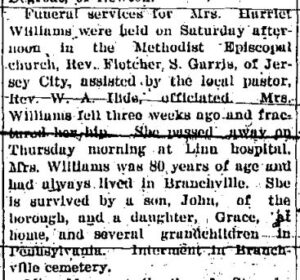 I hope this helps. Contact me if you have any questions, corrections, additional info to add, etc.