James Martin DALY was born in June 1850. There is no birth certificate or equivalent document but he was baptized on June 18, 1850 at St. Michael's Parish, a Roman Catholic church located on Denmark Street in Limerick, County Limerick, Ireland. His name was spelled "James DEELY" in the baptism records, probably reflecting his parent's accent. I have heard many tell me that children were baptized as soon as possible, especially with the effects of the Great Famine still fresh. From what I can tell James celebrated his birthday as June 18.

James' parents were Michael DEELY (DALY) and Johanna O'BRIEN. Her family name was provided on James' Pennsylvania death certificate. The family probably lived on Edward Street, as found in Griffith's Valuation for 1850.

James enlisted with the Prince Consort's Own Rifle Brigade on 27 Jun 1862 at Dublin. He was just 14 years old. The Rifle Brigade is called the Royal Green Jackets today.The Rifle Brigade was organized into 3 battalions at the time; I believe 2 were in India and 1 went to Canada. James joined the unit in Canada based at Montreal.

His brother John (1848-1915) enlisted 2 years before James so he definitely knew someone in the regiment. Both became members of the regimental band. While in the British Army, both were listed under the name DAILY; a common English spelling for the name.

John was discharged in 1870 for a medical condition and James purchased his discharge for £20 on 7 Apr 1870 indicating his intention to emigrate to New York. Shortly after that date, James and John can be found in Waverly, Tioga County, New York. I don't know why they chose Waverly but it probably wasnt' random.

James DALY met and married Mary Teresa MARONEY (1850-1928) in Elmira, Chemung County, New York. They were married at St. Patrick's Parish in Elmira on February 7, 1876. They had 5 boys and one girl:

​1947 was a bad year for the family with the loss of Elmo in February, Mary in September, and Leo in November. In the end, only Eugene had any children that survived to become adults. One of Eugene's sons told the story that his employer at the time thought he was making up the funerals because there were so many that year.

There is a family story that JAmes met Mary while she a waitress in Niagara Falls. There is evidence, however, that she ever lived in Eire County, New York. She might have been working as a waitress but they probably met in Elmira where she lived most of her life up to that point.

LIMERICK, IRELAND – JUNE 27, 1864 – James Martin DAILY, 14, enlisted with the Prince Consort's Own Rifle Brigade today in Dublin. He will be joining his brother John who joined the Rifle Brigade two years ago. James will be serving in Canada.

MONTREAL, CANADA – APRIL 7, 1870 – Private James Martin DAILY, 19, of the Rifle Brigade's First Battalion stationed here purchased his discharge today. He intends to emigrate south to New York state. He will be joining his brother John DAILY, formerly a bugler with the Rifle Brigade near a village called Waverly.

ELMIRA, NEW YORK – 1878 – James DALY was leader of the Emmett Band. The band was organized November 8, 1872. They meet at 656 Magee Street in Elmira every Saturday and Wednesday evenings.

SAYRE, PENNSYLVANIA – 1883 – James DALY was working as a clerk for the Lehigh Valley Railroad (LVRR).

SAYRE, PENNSYLVANIA – 1911 – The Daly family, often led by James, were prominent members of several bands. James led the Sayre Elks Band, the R.A. Packer Band, the LVRR Shop Band (which may have also been the Packer band), and the Emmett Band. A photograph of the Sayre Elks Band is appears on page 76 of Images of America. Athens, Sayre, and Waverly by Bonnie Stacy. The caption indicates that the band incuded 5 members of the Daly family. 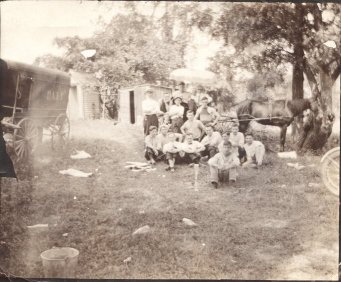 SAYRE, PENNSYLVANIA – JANUARY 1920 – The DALY family of Sayre operated a grocery store at 99-1/2 Stevenson Street in Sayre. Son Jim was the grocer, daughter Mary was a clark and son Leo was a clerk. The photo at right shows Leo among some group with the delivery wagon.

Railroad workers gave the U.S. government many concessions during World War I, which the company owners wanted to keep in place. There were several strikes following the war by workers trying to reclaim what they had lost under the banner of "patriotic duty".

The Great Railroad Strike of 1922 was an example of this. During the strikes that affected the Lehigh Valley Railroad and the LVRR Sayre Shops the Daly Grocery gave strikers credit. Unfortunately, they had to close the store as a result. 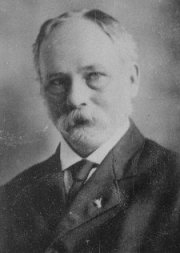