↓
Home→Genealogy→Store Credit in a Small Town

Store credit in a small town did exist before the rise of plastic credit cards. Many small stores where I grew up offered a ‘club’ to help budget and save for future purchases. 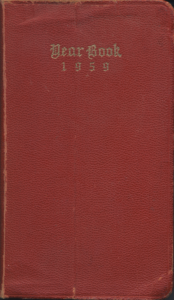 I don’t know when the idea began but stores in my home town and nearby towns offered repeat customers a way to save a little every week to be ready when it came time to buy. This was important for many large families or people whose paycheck had to stretch.

The hardware stores, shoe stores, woman’s and girl’s clothing stores, men’s and boy’s clothing stores, and many others offered a way to save money throughout the year without involving a bank. Maybe it started during the Great Depression when banks were not considered reliable? I don’t know but here’s how the clubs for store credit my mother managed worked.

First, my mother was not an employee of any store. She had a family to raise and needed to save for school clothes, church clothes, birthday presents, etc. My father worked a factory job and moved into management when I was young. He was, however, paid weekly.

Customers could go to the store and deposit money – usually $1, $2, $5 or maybe even $10 – every week but many people relied on a friend or relative to collect the money. My mother was one of those club managers and I often went along.

We would visit people who were ‘in the club’ once a week. They could be neighbors, friends or relatives. They knew she was coming and always had the money ready.

She would write the person’s name in the book for that week while they talked about ‘adult things’. I didn’t really listen to that part.

We would then go to the various stores in town to deliver club members’ money to the store. The stores kept their records in an accounts book or a card index behind the register. They would update each card (or page) to indicate how much store credit each person had. Mother usually talked about ‘stuff’ with the store employees too. Pretty sure I was looking around the store most of the time. Then we were off to the next store.

We always combined these trips with grocery shopping, the bread store, the milk store, and other shops. Yes, there was a small neighborhood grocery where we got bread because they were in the club. The milk store was on a farm so it was fresh and less expensive than the grocery chain store.

Each ‘club’ lasted 15 weeks and committed the person to a specific amount of money. If someone got behind in the weekly deposit they were expected to make it up before the 15 weeks were done.

Once you built up enough credit you could simply go into the store to buy something and say, “charge it to my account.” The store employee would pull your card (or page) and deduct the amount of your purchase from your balance.

Now, sometimes, people needed a little credit from the store. Good customers who were ‘in’ the clubs could buy something that cost more than their balance but only a certain amount over. How much probably depended on their relationship with you. Are you a good risk? Sure. Do you do this a lot? Maybe not this time.

I remember going into the hardware store for some nuts and bolts to fix something (I don’t remember what). When I walked in the owner was behind the counter and said, “You’re Phil’s son, right?” I agreed. He then knew who I was… all from looking at my face (I said it was a small town!). I asked if I could charge my purchase against my parents’ account and he wrote it up. It was that easy.

Every August, my mother would take my brothers and sisters and me to the shoe store and clothing stores to get clothes for the new school year. We usually got hand-me-downs but we also got some new clothes too. That store credit system was the only way she could be ready to shoe so many kids. And there was no bank involved.

Sometimes, we also got ‘church clothes’ for Easter (usually just the girls). The girls usually got a hat (bonnet?) and new shoes too.

There was no interest on either end of the transactions, keeping the store credit process simple. The store didn’t have to invest the money paid into the clubs, track it, and add it to your account balance. You didn’t have to pay any interest if you exceeded your balance because it was usually for a short-term situation only.

I recently came across a book my mother used to keep track of club ‘deposits’. Ignore the date on the pages; she just used a handy book to keep track of who paid into the club week-to-week. She ran several 15-week clubs out of this repurposed date book for 1961, 63, 63, and 64.