Where was Michael Deely (or Daly) of Limerick, Ireland and father of James Martin Daly (1850-1927) born? 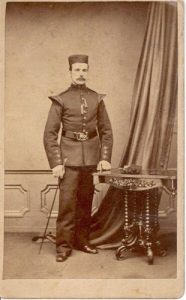 James M. Daly (1850-1927) was born in Limerick (city), Ireland. He was baptized as James son of Michael Deely and Julia O’Brien on June 18, 1850. He joined the British Army and served in Ontario, Canada where he purchased his discharge for £20 pounds sterling in 1870. But, who was his father? Was he a Daly or Deely? Was he from Limerick or someplace else?

Michael and Julia had 4 children baptized in the same church with different references to their names. Michael’s surname spelling starts as “Deely” but evolves to “Daly” over time. Part of my question is whether that change is significant or just another phonetic spelling situation?

I will try to apply the Genealogy Proof Standard to the question above in this post. It’s my first time so bear with me.

The Genealogy Proof Standard needs a question to analyze and answer so the question is:

The first step in determining whether Michael Deely of Limerick was the father of James Daly of Sayre PA is to identify potential records that might help prove, or disprove, the relationship. Many 19th century records were lost and record keeping wasn’t like it is today, so records may be hard to find. The typical records to look for include:

There were no formal birth certificates in Ireland issued by the state during the 19th century so church records are the primary source. Since James Martin Daly of Sayre was Roman Catholic, a search of the Catholic Parish Registers published at the National Library of Ireland (NLI) are the key records for births.

Marriage records are about as available as baptisms. The following was found by Limerick Genealogy during a hired search. The record is not available online. 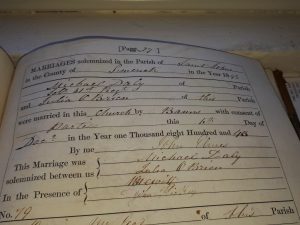 No death or burial records have been found (so far) for Michael Deely or Michael Daly in Limerick. We don’t know if he died there, moved from Limerick or if he emigrated. 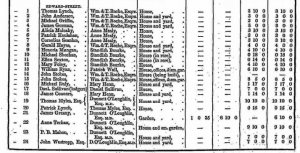 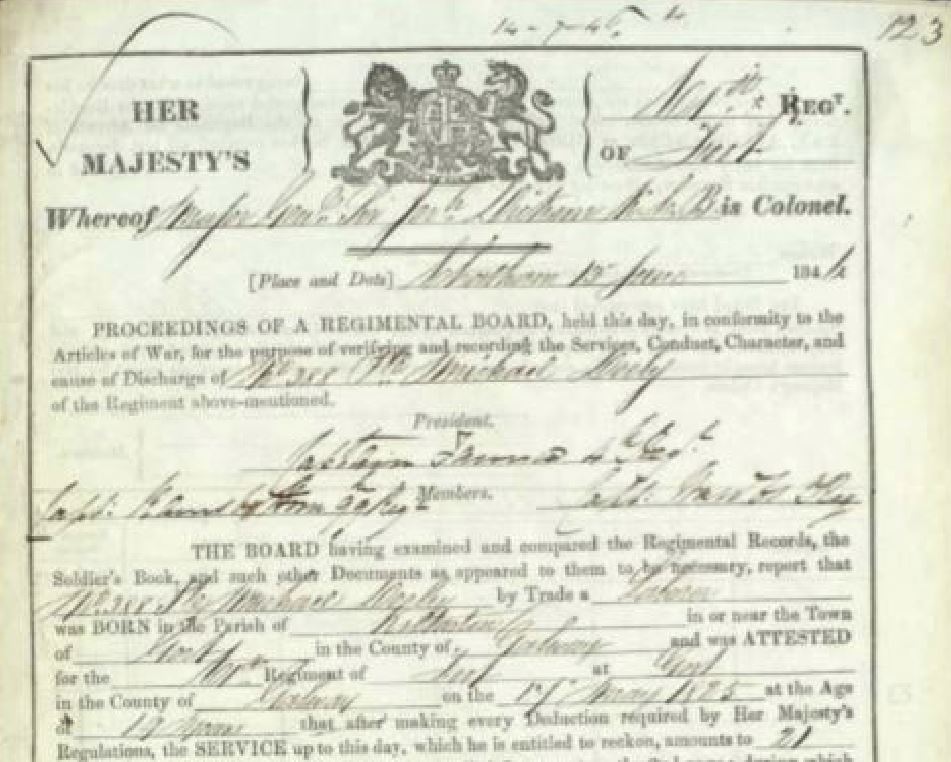 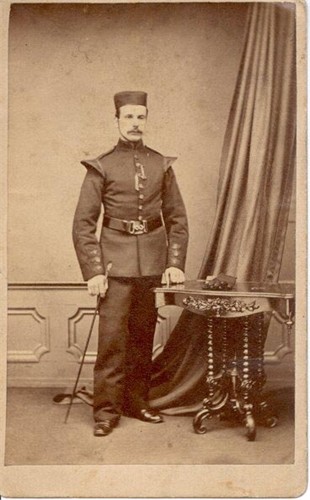 There were no newspaper mentions found (so far) for Michael Deely or Michael Daly in Limerick. 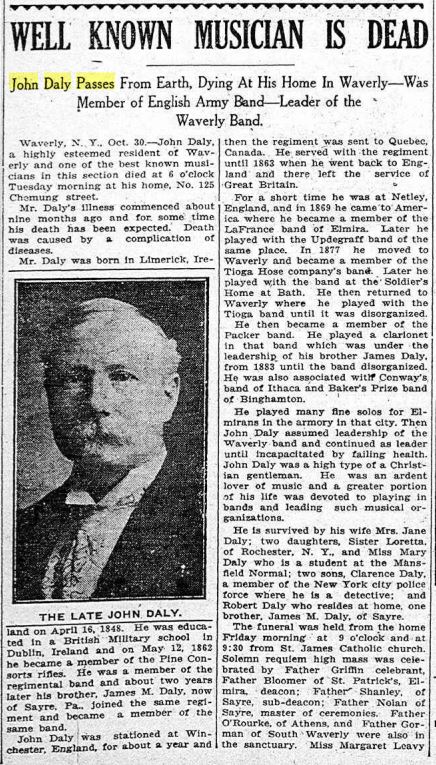 Source citations are critical in helping researchers find a record used in a genealogy or history report. It’s easy to forget where or how you found a record a few months later. So, the source citations used in this report are listed below by type.

James Martin Daly of Sayre, Pennsylvania was my paternal great-grandfather. His life and burial were told to me by my own father. That’s my starting point for this analysis.

What I think I know

The baptism records at St. Michael’s include three boys for Michael Deely or Michael Daly and Julia O’Brien. There is also a baptism for a girl, Bridget, to a John Daly and Judith O’Brien. The timing and bother’s name feel like the father’s name is an error rather than a different family. A search of other John Daly and Judith O’Brien records found none. It seems reasonable, then, to say that the four children were born to Michael and Julia.

There was no marriage record for Michael and Julia at St. Michael’s. A commissioned search was widened to all churches in Limerick before 1848 when son John was born. That search found a marriage record at a protestant church for a soldier named Michael Deely and a local Julia O’Brien. A soldier would probably marry in the protestant church to make sure the army considered it legal. Remember, the Anglican church formed a partnership with the crown in the United Kingdom so the army was protestant. This marriage seems like a reasonable connection to the baptisms.

The marriage record says the groom was a soldier of the 61st Regiment of Foot so I commissioned a search to find anything in the 61st Regiment records. A discharge and service file were found for a Michael Deely with “Limerick” written in big letters at the bottom of the discharge paper. This service record connects directly to the marriage record. Regimental records suggest the regiment – or part of it – was garrisoned at Limerick during the mid-1800s before being deployed overseas. The timing fits for the regiment and the marriage and discharge.

If we agree that the spelling varied in records and evolved from Deely to Daly then it seems reasonable that Michael Deely of Kiltartan, County Galway is the father of James Martin Daly of Sayre, Pennsylvania.

It is common knowledge that people spelled phonetically before education became widespread. As more and more children learned to spell in school, spelling became consistent. Why? Because [probably] teachers needed a way to measure progress.

As spelling became consistent, various accents almost certainly influenced how a name was spelled. Deely, Daly, Daily, and other variations were also influenced by where the person was living when the spelling settled down.

So, Deely and Daly are not that different… if they were ever different. Both descend from the same occupational name: Ó’Dálaigh. In the end, 19th century spelling doesn’t define a separate family.

Bridget’s 1852 baptism lists her parents as John Daly and Judith O’Brien. Judith and Julia are the same name but John is not like Michael. Baptisms every 2 to 3 years was fairly common so it’s likely that “John” is a mistake in the record. This puts Bridget between James in 1850 and Michael in 1854.

A typical birth pattern in the 19th century was to have a child every 2 to 3 years. That pattern would make sense for Bridget to be their child. Barring any other evidence, Bridget will be considered one of their children for now.

I believe the short answer is that Michael Deely, also known as Michael Daly and erroneously as John Daly, was born in or near the parish of Kiltartan, County Galway, Ireland. He was probably born about 1806 and enlisted in the British Army in 1825 at the barracks in Gort. He served in the regiment for about 20 years, which was a typical enlistment in the 19th century. Some of those years were spent “abroad” (not in Ireland or Great Britain).

He arrived in Limerick city in the early 1840s, met, and married Julia O’Brien. Julia was born in or, at least, living in Limerick at the time. When he married he decided he would not reenlist. They settled down and began a family. Michael was formally discharged in 1846 and their first child arrived 2 years later.

The distance between Limerick and Kiltartan isn’t that far so Michael was in familiar territory if not ‘home’. 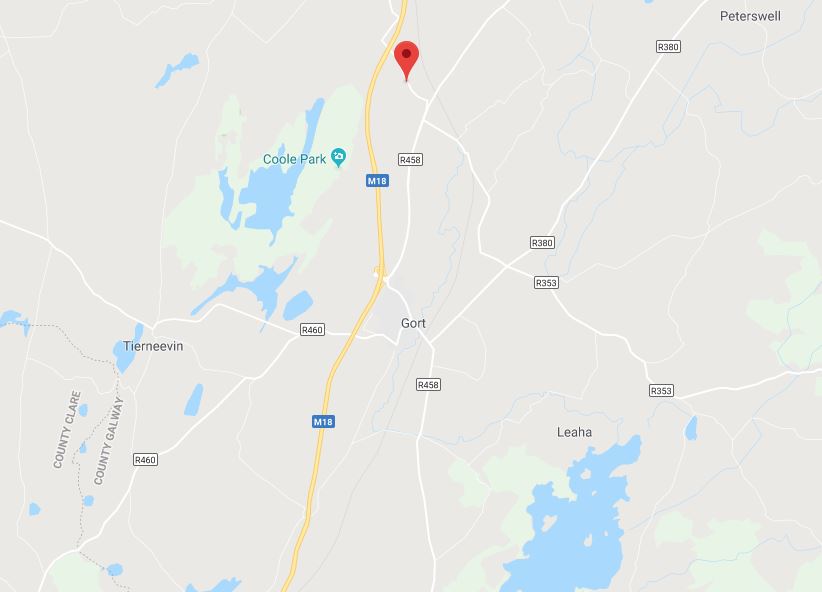 Michael and Julia had four children; 3 boys and 1 girl. All of the children were baptized at St. Michael’s, a Catholic church. Their children included:

John probably didn’t go to Dublin for “military school”, as his obituary suggests, but he probably enlisted in Limerick and went to Dublin for induction. James would have followed his brother’s path. Did they show musical talent before or after enlisting in the army? We don’t know. That part of their story did not get passed down. They were, however, trained in Dublin or England to learn music. They probably started with the bugle to sound orders to the troops on the parade ground or battlefield.

First Battalion of the Rifle Brigade was sent to Canada during and after the American Civil War. There had been several attempts by Americans to invade and ‘free’ Canada before the Civil War that it was a prudent decision to have trained troops in place.

John developed scrofula, which meant he could not close his uniform collar. As a result, John could not serve the regiment any longer. He was sent back to England for treatment in 1868 and probably discharged in 1870. He probably wrote to his brother James about returning to North America and James saved up to buy his way out of the army.

Going back to before the boys were born, we find Michael Deely was a soldier in the 61st Regiment. He met and married a local girl in Limerick when he was closing in on 40 years old. He wasn’t born in Limerick, however, since army units rarely stationed locals in an area because they might need to confront their neighbors. Moving men to other areas separated them from the locals.

So, Michael Deely from County Galway evolved into Michael Daly of Limerick. He was the father of John, James, Bridget, and Michael where the boys moved to the United States after the American Civil War.