My Facebook family group pages provide a place for me to share stories about ancestors and relatives with my many cousins on a site they use every day. I was a little nervous about creating a page at first because I didn’t know if anyone wanted to see the stories. When you start talking about genealogy research to cousins, there’s a time limit before people get bored. So, how did I do it?

First, I had to decide on the family for the subject. This man and woman really defines who might want to hear the stories. I chose two sets of great-grandparents and one great-great-grandparents. Why? Because they defined how many people were in my audience.

I named the groups “Descendants of …” so it was clear who might be interested. So when someone sees the name they can say, “oh, that’s me.” I also quickly created a URL name (a group setting) to make the link friendlier.

I made the groups private. Why? Because only ‘family’ should be part of these stories. A private group also gives people the confidence to add their stories and photos. I open posting up to any user without approval since a delayed post while it waits on me to be available probably affects if a group member posts again.

I left the group ‘searchable’ so any Facebook user can find it if they search for the right names. I know some groups that are ‘secret’ but that bothers me since it feels less inclusive. Less friendly. I’ve gotten several people who aren’t related trying to join the group but that’s on me to control since I don’t know all of the people who might want to join.

I defined a couple questions for each group to help me decide if the person should be allowed to join. 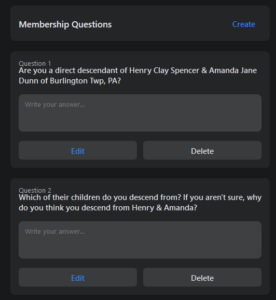 Create rules. They don’t automatically enforce anything in Facebook but they provide you, the group admin, with backing to control some people if they get out of hand. Facebook offers up some standard language, which is pretty good to use as-is. 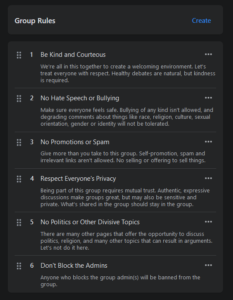 I added a few people as a test group to make sure I created the group right and understood how to add new members.

Once I was comfortable with the setup I then wrote a couple posts and invited more people.

I started with an ‘about’ post to describe who we were going to talk about. I kept it brief and write the first actual post so there was more than just a welcome message.

Each story included photographs, maps, pedigree charts, some records (but not too many), and anything else that helped make the story interesting. Short paragraphs, lists, and white space help readability. 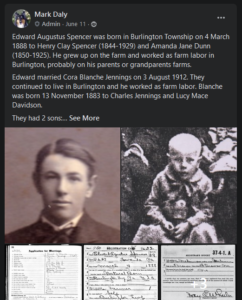 I write the opening sentence to place the who, what, and when for the story. At the end, I always ask if anyone knows about the couple or family. I ask if readers have photos or related stories to share.

None of the posts has become extremely popular in the group but several have sparked some interesting conversations. All have been read and I get many enthusiastic ‘thank yous’ because the stories are easy to read. A couple posts even helped me ‘discover’ new information for my research. I was hoping for something like that, but wasn’t sure if it would happen.

I saw an idea from another researcher who shared information with her extended family that I adopted. She posted facts, like the fact below. The “onthisday” hashtag gives it a consistent ‘place’ on the page and the fact uses a simple format.

Collecting these facts and writing them out is a lot of work though. Once I have them, however, I can post a message like the one above every November 11th as a reminder. Births, marriages, and deaths are the typical facts but I might include important events like enlistment, draft or discharge from military service. These facts can be anything.

So, what have I learned?

First, choosing your subject is really important. Getting the right people to have enough people join is important. Not every relative will be interested or accept an invitation.

Second, certain people are ‘gateways’ to their relatives – children, spouses, etc – that might be interested. Watch for those people. Write stories that get their attention.

Third, it’s not that much work. I’m sure the really popular pages are much more work but I have between 25 and 70 members in 3 groups.

Fourth, if you can get a collaborator – another admin to help manage the page as backup or write posts – that’s better. Posts written by a couple different people helps tell stories or post facts that provides variation. It isn’t just the same writing style every time.

Sixth, keep posts short. I can’t stress this enough. Stay on topic, don’t get bogged down in exceptions, don’t try to teach about genealogy or records, and keep the story short. Heck, this post is probably too long as it is.